Welcome to our webpage. My name is Ryuta Mizuuchi and I arrived here on October 11th as the new Japanese Ambassador to the Republic of Zambia.

Let me start with a quiz

The correct answer is “Yes”.

The first visit to Japan by an African is recorded to have taken place in 1581 – 38 years after the arrival of a Portuguese who brought guns to Tanegashima, an island south of Kagoshima (in 1543), and 32 years after Francisco Xavier of the Jesuit Church introduced Christianity to Japan (in 1549). In a book titled “Histoire ecclésiastique des îles et royaume du Japon”, a French historian François Solier wrote that in that year Alessandro Valignano, a Jesuit missionary, came to Japan. When he made a courtesy call on Oda Nobunaga in “Miyako (Myaco)”, the most powerful feudal lord and de facto ruler of Japan in the “Period of Warlords” (Sengoku Jidai), he was accompanied by, among others, a black-skinned man from India. It is recorded that this person was a “native of Mozambique” and stemmed from the folk the Europeans called “Cafres”, inhabitants of the region close to the Cape of Good Hope. Oda Nobunaga took over the patronage of this African from Valignano, gave him a Japanese name “Yasuke” and made him his man in his rank. It is said that he was over 180 centimeters tall, and thus must have had good physical abilities, so I am sure he was a very powerful and fearless warrior in Japan during the Sengoku period.

“Cafres” are considered to be a group of people who the Europeans thought were born and bred in the region of East Africa (today’s Tanzania, Mozambique and Zambia combined), so “Yasuke” must have been a person who had grown up with a memory of the landscape and sceneries along the Zambezi River.

On November 6th, I took a trip out of the capital Lusaka for the first time after assuming my post as Ambassador and visited the town of Luangwa. This is where the borders of three countries, Zambia, Zimbabwe and Mozambique meet at the confluence of the Zambezi and Luangwa Rivers. People might call this point the “Golden Triangle of Africa”, as it reminded me of the crossover of borders of three countries along the Mekong River, namely Thailand, Laos and Myanmar. The District Commissioner of Luangwa who guided me around enthusiastically explained the history to me that in the history there used to be a slave market in town and that the men and women who were traded were carried aboard vessels sailing down the Zambezi River to the Indian Ocean. This reminded me of the story of “Yasuke” who traveled all the way to Japan as a liegeman of Valignano and was taken up by Nobunaga to become the “first Samurai from Africa”. Simply put, the Zambezi River has never ceased to connect Japan and Zambia from the days of Nobunaga in the 16th century and it continues to flow even today. 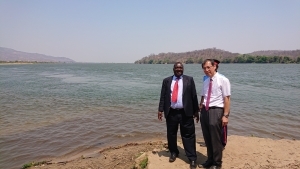 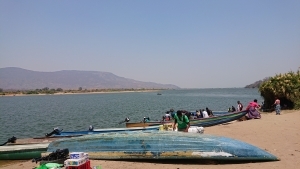 Now, 438 years after Yasuke visited Japan, this year witnessed a major turning point in the relationship between Japan and Africa. In August 2019, TICAD7 was held in Yokohama. Japanese TV stations broadcast programs featuring Africa almost every day to the many Japanese families gathered at their dinner tables. The main message of this Conference was that Japan will strongly and steadily support the Japanese businesses aiming to reach out to Africa.

It is at this juncture that I was assigned as Japan’s Ambassador to Zambia. During my tenure of office, I will make every effort to further strengthen and develop the relationship between Japan and Zambia. I would like also to strongly support the Japanese companies wishing to extend their businesses to Zambia and be of assistance to our expatriates as well as Japanese tourists who visit the Victoria Falls or indeed other places in this country.

Concerning the relations with Zambia, I would like first and foremost to strengthen our ties with the next generation, such as the alumni of the Japanese scholarship programme, the JICA training courses and the so-called “ABE-initiative”. Through the bonds formed with the younger generation, I would like to bring out Japan’s glamour and attractiveness through its charismatic culture such as manga, anime and other items of pop culture to the Zambian population. As a reliable partner for Zambia, Japan will always stand ready to contribute to the sustainable development of Zambia – a country full of potentials.

As I strive to achieve the aforementioned goals, I hope and trust that I will be able to count on the generous support of many people from both Japan and Zambia.